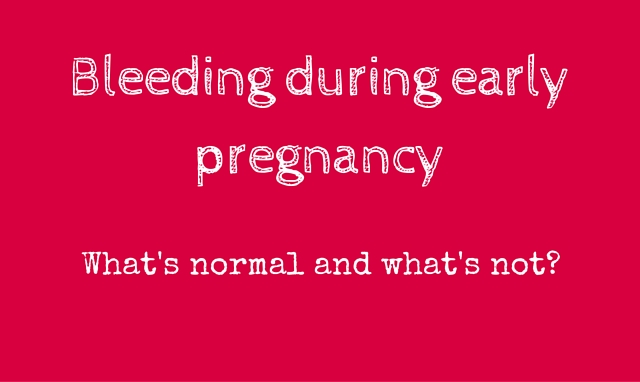 While pregnancy is something you might want to be happy with, most of the times there are scary things that happen during the start and throughout the pregnancy.

In fact, even though you promise not to scare yourself of the smallest symptoms, it is hard to do so.

It is quite hard to stay calm and take things easy when you suddenly experience strange things.

One such strange thing is bleeding and/or spotting during (early) pregnancy.

How can you be calm while you have bleeding or spotting while pregnant? That’s challenging.

Well, here are some insights as to why bleeding could occur in early pregnancy.

While bleeding could be a sign that something is wrong, it is certainly not always the case.

This post is to educate you about what’s normal and what’s not so you can either stay calm, or call your doctor and get things clarified.

Let’s see why bleeding or spotting could actually occur during early pregnancy. That way you can avoid unwanted panicking by knowing your accompanied symptoms.

When bleeding or spotting occurs, you should pay attention to the accompanying symptoms so you can get an idea of what’s going on.

Here are a few causes.

This is one of the most common reasons for bleeding during early pregnancy. Implantation bleeding is caused when the fertilised egg implants in the uterus.

Not all women will experience this bleeding, but many do.

At the same time, implantation bleeding is one of the early pregnancy signs!

During pregnancy, your blood flow (and volume) increases. Especially, blood flow to your uterus and private parts increase.

This also makes the cervix soft. Due to this it is quite common to experience bleeding (and sometimes, pain) after intercourse.

This is absolutely normal. However, if you find that the pain is disturbing or if the pain lasts for a long time, call your doctor.

It is quite easy to catch an infection while pregnant. Your body will lower its standards as far as defensive measures are concerned so it can protect the baby well – which is why you easily get cold and other allergies during pregnant.

Either this, or other kinds of infections could cause bleeding.

Even though this kind of bleeding is not related to miscarriage, you should call your doctor as infection of any kind is no joke and it can affect you badly, if left unattended.

Bleeding during early pregnancy is often related to miscarriage. And yes, if you miscarry you will bleed.

However, if your bleeding is related to miscarriage, you will also have period-like cramps in your lower abdomen.

The cramps won’t be brief and they won’t go away. And, your bleeding will be heavier compared to bleeding due to implantation or other not-to-worry-about reasons.

If this is the case, you should visit your doctor immediately.

Ectopic pregnancy is a rare condition but does prevail and cannot be taken lightly. It can be a life threatening condition.

It is a condition when a fertilised egg implants outside the uterus, usually in any of the fallopian tubes. Hence it is often called tubal pregnancy.

Not only such a pregnancy cannot continue, but if the embryo grows beyond a certain level it can cause rupture of the tube and hence acute pain and bleeding.

A woman could collapse if such a situation arises and if not treated on time, this can be fatal.

Bleeding accompanied by acute pain, usually on the side of the abdomen (where the tubes are) is the symptom for ectopic pregnancy.

This is a very rare case. It is an abnormal pregnancy that will not continue until term. Once the egg implants, it grows into a mass of clusters resembling grapes.

Since this is an abnormal pregnancy, body tries to abort the pregnancy naturally.

This can lead to bleeding.

Very rarely, a scar from the previous C-Section can rupture and this can lead to bleeding. This is a serious condition and requires immediate medical attention.

Even though this does not occur during early pregnancy, due to the seriousness of the issue I’ve included this in the list.

An immediate surgical intervention is needed if this happens.

What’s normal and what’s not in early pregnancy bleeding?

Bleeding during early pregnancy can be scary and leads to confusion. However, if you pay attention to the accompanying symptoms you can get an idea about the problem.

You have to observe the accompanying pain, it severity and the amount of bleeding. And also for how long it lasts.

If you have slight spotting with negligible pain, and if it goes away after a short while, you need not worry.

But if the pain and bleeding prolongs and/or if the pain is severe it is something to be concerned of.

Similarly if your bleeding is heavy and if you happen to pass clots, you have to seek medical attention immediately.

The location and severity of the pain also matters.

If you are unsure or if you are concerned, it is always better to seek medical attention immediately rather than assuming and making things worse.

The 5 Unconventional Benefits Of Exercising (#4 is my favorite)
What are Wellness Programs and how do they work?
10 Natural Home Remedies for Seasonal Allergies
Fifteen Health Benefits of Coconut Water
What are Trans fats, why they are unhealthy and what to do instead?
Top 10 Ways to reduce stress naturally for your well-being
Finding Pedicure expensive? Here’s how to do (a salon style) Pedicure at home!
Natural, no-brainer ways to keep your house cool this summer
How to get soft and silky hair naturally at home?
​What are the types, benefits and uses of Cinnamon? Let’s talk beyond weight loss